If you are travelling to Sydney read on.. 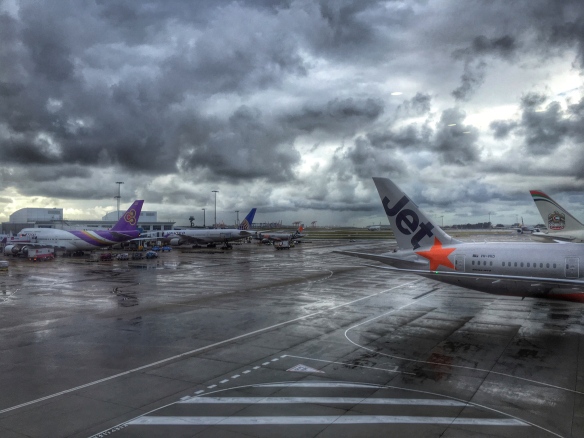 I always book a Silver Service cab to take me to the Sydney airport from wherever I am. They are reliable, an excellent service. However they are more difficult to locate on arrival in Sydney so I usually take pot luck with a taxi off the ramp or better still take the train to the city then find a cab…much cheaper.
On arrival I had pre -booked  Corporate Cabs Australia and they didn’t turn up!!

I’ve blogged about Sydney several times, check out this blog for day trip ideas and other tips.

Cafes, there are hundreds to choose from and some are doing very innovative food creations.

Menu items that caught my attention in Sydney this week were:
At my local Clovelly cafe The Top Hat I spied these: 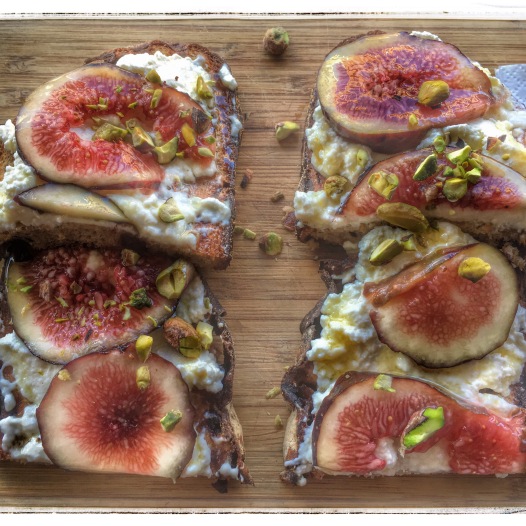 Iced Chai
Affogato Expresso served with scoop of ice cream; Yes we have affogato on menus too, desert menus but this was on their drinks menu-
You could easily swap the Sour cherry toast for raisin bread I think! 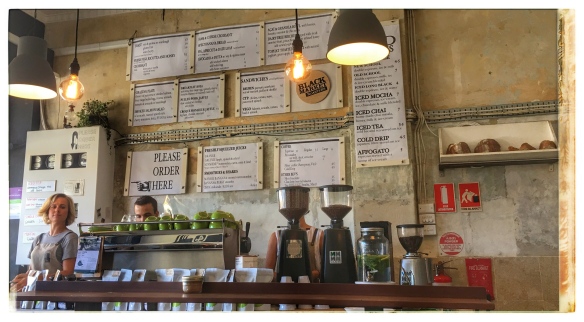 I only had coffee and that was excellent and the folk were friendly.

A fabulous small Italian restaurant serving fresh cuisine, menu sample here.
Calamari Sant’ Andrea
squid fried, rocket, balsamic  22
Crudo
tuna ‘tonnato’  23
Bufala
heirloom, figs 24
Risotto
prawns, clams, cuttlefish, bottarga 29
Movies
I headed to the historic old Art Noveau Ritz Theatre in Randwick – interesting one car park building but no vacancies – not good for business and the street parking was only 1 hour! Anyway I enjoyed the movie; The Lady in the Van with Maggie Smith. A great $9.00 worth- I thought Maggie Smith brilliant, I’d expect nothing less. The story is one most of us would rather not face – about being old and dealing with the elderly!
Re the theatre, it was built in 1937, it is an example of the art deco cinema architecture that found a home in Australia during the 1920s and 1930’s and has 5-6 theatres. It seems to have lost much of its elegance and style which is rather sad but it does run the best art movies. 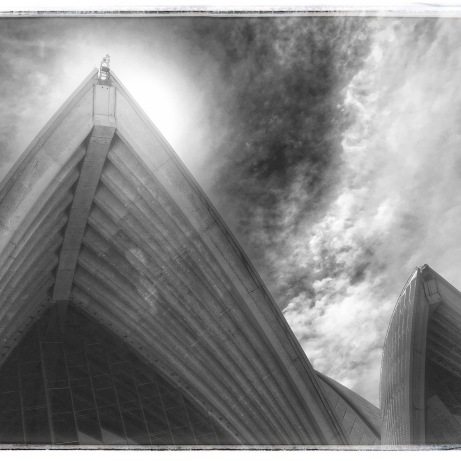 Another fun place to visit is The Grounds at Alexandria. A great selection of eateries  and a few animals to amuse the children. Look out for Kevin Bacon! 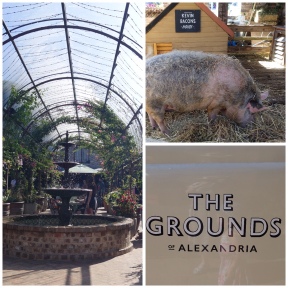 Bus tickets sometimes cannot be purchased on board the buses, so buy an Opal card at a diary and put ten or twenty dollars on it, no expiry date. Efficient way to get in and out of the city. Parking in the city can easily be $50.00 for two hours!!

So this is just a few brief comments on our nearest getaway, Australia.. Air fares are cheaper than ever and Sydney has sooo much on offer. Watch for VIVID in May and June. The sails of Sydney Opera House will be lit with works by Indigenous artists for the first time this year for the Vivid Sydney festival from May 27 to June 18.

To photograph Vivid watch this video. and impress your friends with amazing images.

The shopping is amazing, remember to claim your tax back as you depart Sydney airport. Westfield in the city Level 4 has 3-4 fantastic women’s shoe stores, trust me I know!! There food hall is excellent, yes they have a  Michelin Chinese eatery there. Din Tai Fung Restaurant… I love it. 188 Pitt Street | Shop 504, Level 5.

An Aussie  funny to wind up with.

”  We live in a semi rural area. We recently had a new neighbour call the local council   P & W office to request the removal of the WOMBAT CROSSING sign on our road.
The reason: ‘Too many wombats are being hit by cars out here! I don’t think this is a good place for them to be crossing anymore.”
True Story from Australia.

Sarah lives in one of the most idyllic places on the planet on Great Barrier Island. The island is only a 35 minute flight from Auckland but it is light years away from city life. When she was 17, recognizing the uniqueness of Shoal Bay she set her sights on buying a piece of land from her family and 12 years later she took ownership. Her dream was to be a successful potter. I’m not sure when she fulfilled her dream but now as a mother of a teenage daughter and younger son there is no doubt about her success.

Sarah’s studio in  Shoal Bay is easily found near the Tryphena Wharf nestled amongst Nikau and fern alongside a gentle stream home to hundreds of tiny glow worms. Recently she had a bridge constructed to a secret bathhouse in the bush. Rustic or romantic(purely functional Sarah says!) you decide. She has a small character filled, self contained unit where you can escape the city for a day or a month. The room has a mosaic floor and other artistic curios adorning the walls and a large tree trunk is the centrepiece of this room full of quaintness. for enquiries contact Go Great Barrier and ask about ‘The Gallery’

I was inspired by Sarah’s enthusiasm and dedication and put a few questions to her.

Sarah, when did you decide to make pottery your career? and do you have any formal training?

I went to Carrington Polytech in 1990 to study interior design. As often happens in that environment where you are exposed to a wide variety of materials and techniques, I deviated from my path into design, having been captivated by ceramics. For the last 2 of my 4 yrs there I majored in clay.Returning to the Barrier the year after I graduated to build a studio on my fathers front lawn.Having felt the stigma of ‘stepping back from design to craft’ I was not setting my sights on being a ‘wealthy potter’Rather I was certain that I just needed to have a space where I could make stuff to my hearts content, and if that meant struggling forever to make ends meet then so be it

Have you won any major awards for your pottery/stoneware?

I have found that I manage to make a living mostly selling direct from my studio, as a result I am very complacent about entering into award competitions.However I did grab a couple of mugs off my shelf in 2009 to pop into the mug show at Lopdell House, Titirangi as I happened to be in town at the right time, And was honored to be awarded ‘Best mug in show’

Have you kept your first ever piece or didn’t you realise that would become a treasure?

I have kept one of my first pieces I made on the wheel and it is great to bring out when I am teaching someone to throw…. saying ” don’t give up…. see how bad my first one was!!”

Like your daughter you also went to boarding school at Epsom Girls in Auckland but you are an original Barrier girl. Were you born on the Island?

I was born to the island, coming home at 2 weeks old on Sea Bee Air.

What did your parents do on the island?

My Dad came here to retire in 1966, meeting my mum a couple of years later as she backpacked around and had 2 more children of which I’m the youngest.

You seem to have numerous projects on the go – how do you decide which one to start on every morning?

I have too much to do so I do what I want, usually motivated by what is inspiring me most at the time, although in saying that I’m currently working through quite a long order list so that takes priority…. and yes the lawns are being avoided. 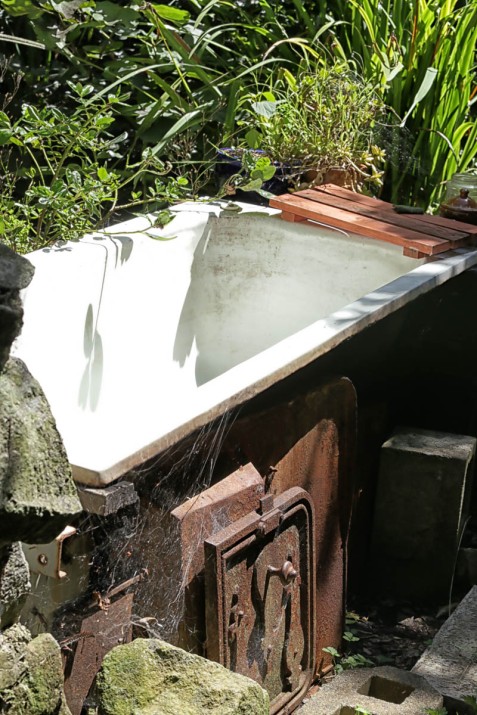 Above is the outdoor bath and her new project is the bridge access.

What is your motivation?

I think I have the best job in the world, I get to create in a wonderful environment and can juggle it around family commitments. It is very seasonal so while I am flat out over summer there is a fabulous off season when I can sink my teeth into other projects.

Many young artists would be envious of your studio and space not to mention your success. What advice would you give to a young enthusiastic artist?

just start….. many things in the beginning were a bit daunting in particular the logistics of getting everything to and from the Island. As I look back I recognize things that used to be a challenge and now are second nature.

So next time you are on Great Barrier Island collect a gallery directory from i-Site and explore until your hearts content!

PS Say hello to Sarah and her goats!! 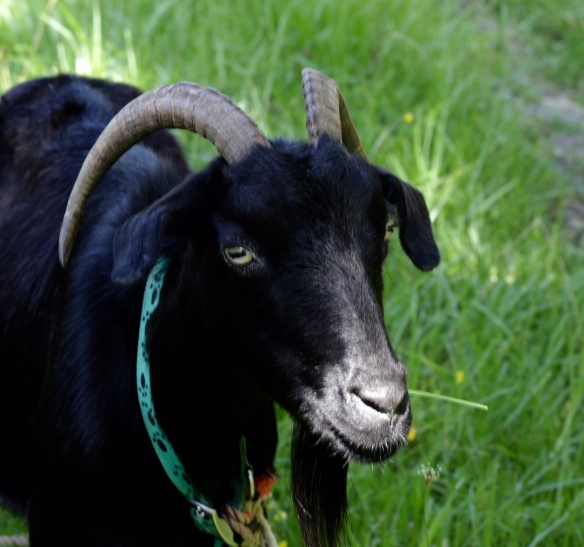 Above: Native Rata and Awana Bay.

How many folk who live in Auckland have never been to Great Barrier Island? Yes; I thought as much…dozens of you. You’ve been to Paris, London, Istanbul, New York and Queenstown though haven’t you??? It’s OK…”it will still be there when I’m old” I hear you say… well it will be but trust me it will have changed by then. Currently Great Barrier Island is a hidden gem 35 minutes away by small plane or 4-5 hours away by boat. Great Barrier Air are an  excellent airline. Last time I visited, about 15 years ago, the roads were all gravel, windy and dusty, the rental cars were scarce, the shops could be counted on one hand and the population was maybe 400. Today it has 852 laid back residents. The population decreased when the property market hiked its prices. It has had as many as 1000 residents over the years. Tourist numbers reached 5000 a couple of years ago but exact numbers are hard to obtain. The main road is tar-sealed and they even have a very good local Art Gallery run by enthusiastic volunteers.

Shoal Bay Pottery above is the gallery of Sarah Harrison END_OF_DOCUMENT_TOKEN_TO_BE_REPLACED

I love the small things in communities that no one much knows about out in the big world. This is tribute to my late mother  – Patricia Jeanette Rowley.

The West Otago Provincial Executive of Womens Division of Federated Farmers is quite a mouthful. My mother served the WDFF Otago (we think) as President as well as being the President of the Roxburgh Branch. Later on she was elected to the Dominion Council and travelled to Wellington for regular meetings. She contributed greatly to the work of this organisation in spheres such as Health, Education and Law as it affected rural women.

She was a woman before her time and she was forward thinking.”The Rowley Brooch” competition was instigated by my mother Pat Rowley in 1972. END_OF_DOCUMENT_TOKEN_TO_BE_REPLACED 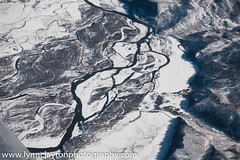 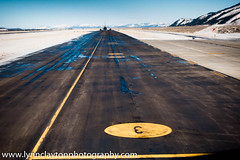 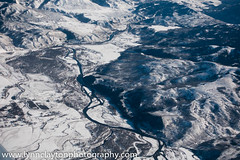 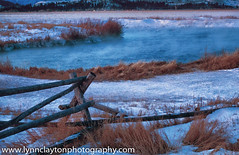 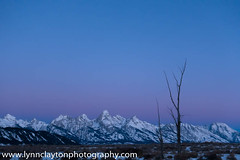